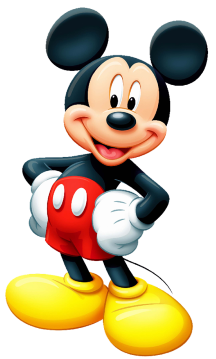 "I am not an animal! Well, okay, I'm kind of an animal. My features are animal-like, I don't wear clothes, and I smell a bit outdoorsy most of the time. But I have a job, and I talk and stuff too, so when I say I'm not an animal I think technically I'm on solid ground."
— Duckman, Duckman
Advertisement:

They're animals who think, talk and act mostly like human beings. The Funny Animal has almost all the mannerisms of a human being. Sometimes, only their appearance distinguishes them from the hairless primates who draw them. Indeed, one of the main incentives in using such characters are that they are more distinctive, and hence easier to draw, as recognizable individuals than ordinary humans. Like the Civilized Animal, they can be anywhere on the Sliding Scale of Animal Communication.

On the Sliding Scale of Anthropomorphism, these fall somewhere between the Civilized Animal and the Beast Man. As there can be some confusion between all the anthropomorphism tropes, here's a guideline:

Practically any cartoon series from The Golden Age of Animation, or video games aimed at children younger than 13 have at least one such character.

Funny Animal is the technical term used by cartoonists to refer to the genre and characters. Note that the "funny" in the title isn't literal: Funny Animals can be serious characters too, and an animal who is funny is not necessarily a Funny Animal.

Frequently overlaps with Animal Superheroes. May live in a World of Funny Animals. May suffer from Carnivore Confusion and Furry Confusion.

For further tropes pertaining to funny animals, furries and the tropes that appear frequently in their genres, see Funny Animal Tropes. Compare Intellectual Animal. Closely related to Beast Fable, which is the ancient form of the genre.