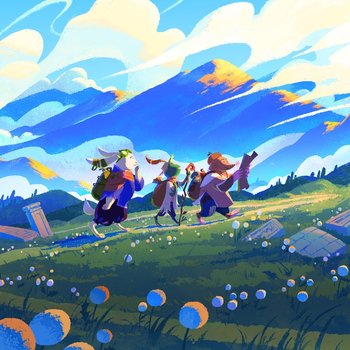 The road has a song all its own.
Advertisement:

Wanderhome is a Tabletop RPG by Jay Dragon, published through Possum Creek Games. It is a pastoral fantasy RPG game built through the No Dice, No Masters engine (more often called Belonging Outside Belonging), a design philosophy related to the Powered by the Apocalypse engine. This is Jay Dragon's major-project follow-up to 2019 BoB game Sleepaway.

Set in the idyllic world of the Hæth, the players of Wanderhome follow a party of traveling animal-folk as they go from village to village, meet other inhabitants of the Hæth, and watch the seasons change. This game is not a Heroic Fantasy, as it instead focuses on the lives of ordinary folk.

On July 2020, the free preview playkit was released, which can still be downloaded from itch.io.

The full PDF version of the Wanderhome was released on April 5th, 2021; it can be bought on itch.io

. The physical edition can be pre-ordered through Possum Creek Games