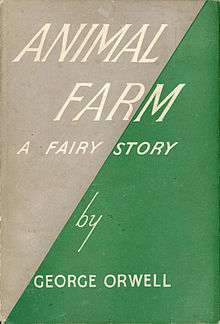 It's actually a Mature Animal Story.
"All animals are equal ... but some animals are more equal than others."
Advertisement:

A Beast Fable by George Orwell satirizing the evolving Russian communism, as well as a book with two adaptations that have an understandably misplaced demographic.

In the book, Orwell tells, allegorically, how the Russian Revolution would go if its participants were animals, and if you reduced Russia to the area of a typical English country farm. When you get what the point of the book is — being a satire of Stalinism written during World War II — it's not hard to guess where the plot is going.

The animalist state of Animal Farm is founded by Old Major's philosophy of peace and equality among animals and a deep hatred for humans. To confirm their stance, the animals create a system of constitutional laws collectively called "Animalism" that are painted on the side of the barn:

But as Napoleon's reign grows corrupt, the laws are eventually violated by the pigs and rewritten entirely to one famous phrase ("All animals are equal, but some animals are more equal than others"), with the maxim "Four legs good, two legs bad" changed to the also-iconic "Four Legs Good, Two Legs Better".

Animal Farm was strictly outlawed by Josef Stalin as it technically depicted Stalin and other Soviet leaders as evil pigs (Stalin as Napoleon, Leon Trotsky as Snowball, and Vyacheslav Molotov as Squealer. Also, Karl Marx as Old Major, though that one technically wasn't evil). The inspiration for the book came about when Orwell saw a boy leading a cart-horse, whipping it all the while. Orwell thought that if animals realized just how strong they are, they could defeat the human race and end up running the world.

"What? Not enough tropes? If Comrade Napoleon says it, it must be right. I will work harder!"