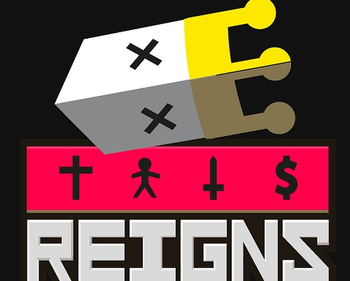 The King is dead... Long live the king!

A Simulation Game by Nerial and Devolver Digital, Reigns

puts you in control of a succession of kings. Control of the realm sits at your fingertips; a single swipe left or right determines how you respond to each situation that your royal court brings to your attention. Each decision, no matter how minor it might seem at the time, dictates how your story unfolds over generations. As a result Reigns has a deck-building mechanic: Certain choices will add new cards, and thus new events and problems. How will your story unfold? How will each of your rulers be remembered?

Hit Steam, Android and iOS on August 11th, 2016. A sequel, Reigns: Her Majesty came out on December 6th, 2017. A third game Reigns: Kings & Queens (with all content from both games and enabling local co-op) for Nintendo Switch would release in summer 2018, with a spinoff based on Game of Thrones released in October 2018.

An asymmetric party Board Game for 3-6 people, Reigns: The Council was funded through Kickstarter.

This Simulation Game contains instances of: