Film / Triumph of the Will 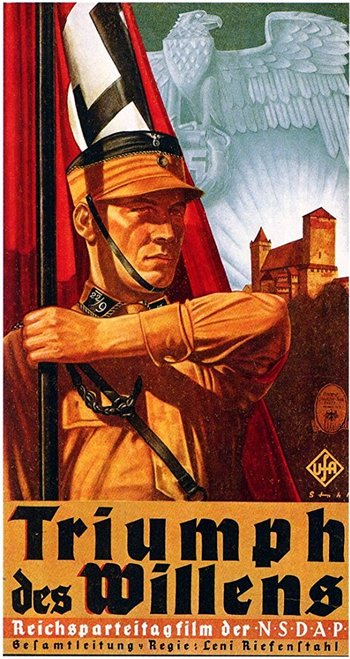 This right here, is exactly the image they wanted you to think of, when you thought of them.
Advertisement:

Triumph of the Will (German: Triumph des Willens) is a 1935 film directed by Leni Riefenstahl and ordered by the government of Nazi Germany. It was shown once a year for propaganda purposes in every German cinema until 1945. The film was wildly successful at its intended purpose and to this day it forms a reference point for people's mental image of the Nazi regime. Moreover, the extent that Triumph of the Will continues to be regarded as an innovative and groundbreaking film has its roots in a concerted effort by the Nazis to promote the film as an ideal in contrast to various forms of expression the Nazis disapproved of.

Ultimately, the triumph of Triumph is one of budget. With the full backing of the state, the film sought to convince both foreign and domestic audiences that the Nazi regime was unstoppable through sheer force of spectacle. Surprisingly (or not) the film has since proved highly influential—the medal scene that ends Star Wars is a direct lift from the scene in this movie where Adolf Hitler, Heinrich Himmler, and Viktor Lutze lay a wreath at the memorial for President Hindenburg.

The movie is officially not in the public domain, as its rights are being held by the German Government through Transit Film GmbH. It can however be viewed for free online. Interestingly, the film is not censored in Germany, but due to its status as a Nazi propaganda piece, it can only be screened publicly in an educational or scholarly context.

See also Olympia, Riefenstahl's two-part documentary of the 1936 Berlin Olympic Games. Compare The Birth of a Nation (1915), a similarly influential film that also acts as a white nationalist propaganda piece.