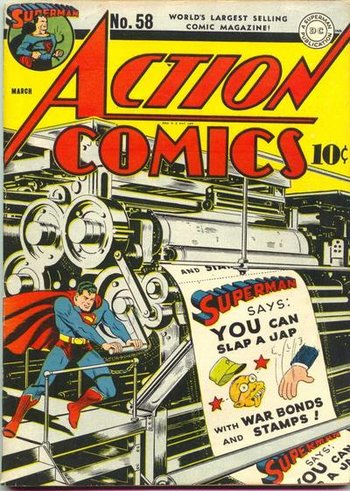 "Look, I was young and stupid, okay?"
"They have an engine called the press whereby the people are deceived."
— The Director, That Hideous Strength
Advertisement:

The Propaganda Machine a.k.a. The Ministry of Truth delivers The Truth from The Government to the people.

At least, that's what they say. In fact, a Propaganda Machine is only employed by The Empire and used to brainwash people into Gullible Lemmings who believe that everything is all right when, in fact, it isn't, and that the very people who could help them are their enemies. Vigorously hated by La Résistance because it turns the very people they are trying to do good for against them.

The machine exists to create Propaganda Pieces and habitually indulges in Malicious Slander, Astro Turfing, and Divide and Conquer toward its scapegoats and enemies. Canned Orders over Loudspeaker is a common tool employed by the Propaganda Machine. They are opposed by the Voice of the Resistance. The Propaganda Hero is their carefully embellished national hero and Tokyo Rose is their representative to the outside world.

By its widest definition, just about every political entity practices propaganda; namely, making themselves look as good as possible while either downplaying or downright denying any good qualities in their opponents. The negative aspects of this trope come in when this is the only form of news someone has access to. It could be said that that the bad guys engage in "propaganda", while the good guys do "public relations". However, the Voice of the Resistance is likely considered propaganda by those who don't agree with them. How much of the content is truthful and how much isn't, as always, depends on who is producing it. Examples of this trope tend to be extreme cases where the preacher is using a combination of extreme censorship and/or outright lies to hammer their point across, so take note of the Rule of Cautious Editing Judgement.

When instead of propaganda, the government provides mindless entertainment for the people to lull them into contented apathy, it's Bread and Circuses.

Compare with Recruiters Always Lie. Compare and contrast with the Censorship Bureau.

Alternative Title(s): The Ministry Of Truth