Literature / The Machineries of Empire 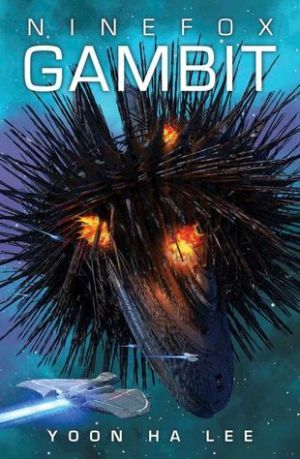 The Machineries of Empire is a military Science Fantasy trilogy by Yoon Ha Lee.

The calendar shapes everything. Large amounts of people following the same calendar and celebrating the same holidays at the same time can warp reality, producing exotic effects that seem almost magical. Of course, this only works as long as everybody in the area follows the calendar, and when most of your weapons and technology is exotic rather than invariant, it stands to reason that calendric rot - degradation of the calendar - is a problem.

It's a problem the Hexarchate is currently having. The Fortress of Scattered Needles, a space fort that has never been conquered, protected by an unbreakable shield of invariant ice, has been taken over by heretics. If left unchecked, the calendric rot will spread from there - and the Fortress lays in the heart of the Hexarchate. The suicidal task of reclaiming it falls to Kel Cheris, an infantry captain disgraced after utilizing heretic calendar to win a battle. Fortunately, she has the undead general Shuos Jedao, the most brilliant commander the Hexarchate ever had, attached to her shadow as an advisor.

Unfortunately, Shuos Jedao is insane, and his last battle in his own body saw him murder everyone under his command. As the siege wears on, Cheris must decide how far she can trust him – because she might be his next victim.

Tropes present in the series are: