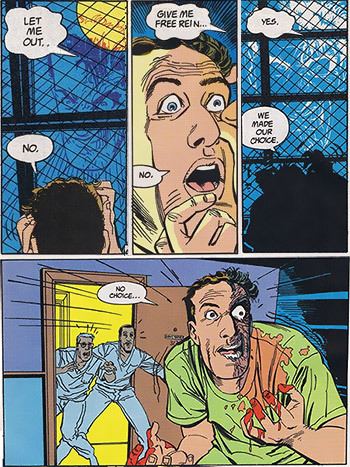 After months or years of suffering a Split Personality, Enemy Within, or Superpowered Evil Side, the character is cured! ...by having the weaker, "sane" personality lose all control over the body to their inner evil. Like the slow erosion of a mountain, Jekyll has succumbed to Hyde's implacable id-like force, leaving nothing but the shell of who they were.

This isn't just an identity crisis or something that can be wished away with good intentions, at least not easily. This is the permanent and literal death of a person— or at least a personality.

If the takeover is incomplete, expect to see signs that the original is Fighting from the Inside. Antonym to Split-Personality Merge. Compare and contrast with Copied the Morals, Too, where some sort of evil clone or knockoff of a heroic character somehow inherits the heroic character's morality, much to the detriment of the villain's plan. When this is induced by outside brainwashing, it may be Brainwashing for the Greater Good.