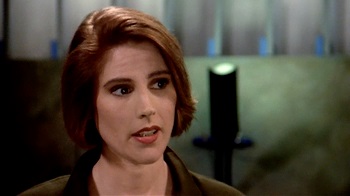 The return of Lyta Alexander.

Sheridan and Delenn run into each other and take some time to discuss their different points of view, while on Mars a dying man gives something to a Ranger and asks him to get it to Babylon 5.

Sheridan and Garibaldi talk together as they use the bathroom, then secure the location and talk about involving Talia in their plans. She's loyal to the Psi Corps, but still knows what her home is, and they decide to bring her in.

Talia is currently with Ivanova enjoying some lunch which is interrupted by a call for Ivanova. She has to head off to C&C and Talia has to find a place to stay while her quarters are worked on. Ivanova offers her place for a while.

A damaged ship has come through the jumpgate and is now adrift outside. Ivanova orders it brought aboard. When the pilot is brought out, Garibaldi recognizes her.

Later he explains to Sheridan who she is, Lyta Alexander, the station's first commercial telepath, and the one who scanned Ambassador Kosh while trying to save his life. Garibaldi mentions that after that, she was never quite the same, and was soon transferred back to Earth.

Lyta, meanwhile, wakes up and demands to speak to Sheridan, but doesn't want to be alone with any of them. When she meets with the command staff she explains that there is a mole somewhere, an implanted personality, code-named Control, created by the Psi Corps to spy on them, and will take over the host's body when a telepathic password is given.

She wants to try and expose Control by sending the password but Sheridan is reluctant. He dismisses her and asks for opinions. Ivanova makes her feelings absolutely certain. "Does the phrase 'no way in hell' ring a bell?"

Later Sheridan is pacing in the rock garden when Delenn comes up to discuss food shipments. She asks if he's alright and if he wants to talk about it, but he can't. He does start talking about his situation in terms Delenn doesn't understand, and she asks for clarification, eventually cheering him up with her attempts to figure out his language. Then a call comes in for him.

He and Garibaldi meet and the chief tells him that Lyta's story checks out. Sheridan still doesn't want to believe her and decides to make a decision in the morning.

Ivanova is not in a good mood and taking her anger out on her kitchen. Talia comes in after using the shower. They talk a little about Lyta, Ivanova asking if she can be trusted, and Talia says she can.

Meanwhile, Garibaldi orders Zack to take Lyta to a more comfortable location, but along the way, they are attacked. Some of the guards are killed, but Lyta manages to escape.

In the morning, Sheridan is beginning to think there is truth to Lyta's allegations, since very few people knew she was even on the station. He decides to allow her to send the password. If they can find her.

Lyta makes contact with Delenn and asks for her help, while Ivanova goes back to her quarters where Talia says she's moving back to her own.

Delenn tracks Sheridan down and gives him a message from Lyta. She'll meet with them but only if the whole command staff is there. She doesn't want to be alone with any of them. Sheridan agrees.

When he gets to his quarters he finds Ivanova there. She needs to tell him something about why she can't let Lyta do it. It takes her a while but she eventually reveals that she's a latent telepath. Her mother did everything she could to keep Psi Corps from noticing her. And it's why she never lets a telepath into her mind. Sheridan tries to persuade her to go through with it, but she's still hesitant.

Delenn brings Lyta to Sheridan's office where he will allow here to send the password. She goes through Sheridan, Franklin and Garibaldi with no result, but they hold off on Ivanova and begin bringing in people from other areas. After hours seeing dozens of people, they still haven't found Control and patience is beginning to wear thin.

Lyta begins demanding to know what Ivanova is hiding and a shouting match ensues before Sheridan interjects, telling them this is what Psi Corps wants, them mistrustful of each other. Ivanova finally agrees to go through with it. Lyta sends the password and is surprised when Ivanova blocks her, but she eventually relents. No result.

Then Talia comes in and Lyta sends the password to her. The change is immediate and Talia tries to grab a gun and shoot Lyta as Garibaldi drags her away.

Later they discuss the ramifications. Talia knows a lot about what they've been up to, the Underground Railroad for one, but they also dodged a major bullet. If Lyta had come after they had brought Talia in on their plans...

Ivanova goes to Talia's quarters and confronts the woman there. She tries to appeal to any bit of Talia's personality left, but Control is all that remains. She mocks Ivanova and the relationship she had with Talia, claiming to have been the one telling her to accept Ivanova's advances. Tearfully Ivanova says that Talia is dead and leaves.

Her purpose accomplished, Lyta is leaving the station, but before she does, she goes to see Kosh. She tells him she didn't tell Psi Corps anything, even though they tried to make her, and she asks to see one more time. Kosh's encounter suit opens, and Lyta looks upon the Vorlon.