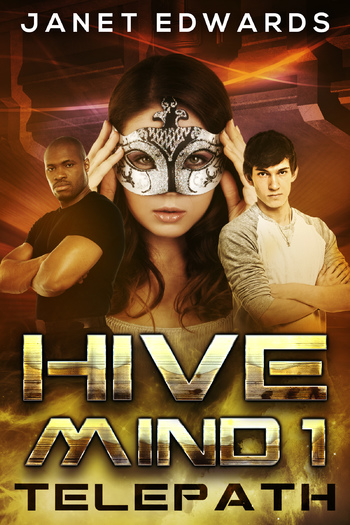 Amber as the Light Angel, flanked by Adika and Lucas
"It's a mistake," I repeated. "I'm not a telepath."
She turned to face me again, and her lips weren't moving. "I stopped talking two minutes ago, Amber. You've been pulling the pre-vocalized words directly out of my mind."
Advertisement:

Hive Mind is a series of science fiction works written by Janet Edwards.

The year is 2532 in Hive England, a massive arcology of one hundred million people on 100 residential levels across 10 zones. An eighteen-year-old girl named Amber is about to enter Lottery, the achievement test all eighteen-year-olds go through to find their perfect job. Upon completing Lottery, they will be "imprinted" with all the knowledge they need for that job.

Except Amber finds that she will never be imprinted, because she is one of the extremely rare telepaths that the Hive needs to use to protect citizens from each other. As an elite telepath, she is given command of a unit that seeks out and captures "wild bees" before they can hurt the Hive. As the newest telepath, she is a critical guardian, protecting the Hive from descending into chaos.