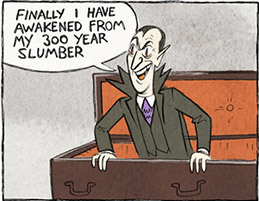 "It's time to conquer Earth!"
"Why is it always 1000 years ago? That must have been one heck of a year.."
— Spike, My Little Pony: FIENDship Is Magic #5
Advertisement:

Pick a historical event at random. Now, how many years ago did that event happen? Probably a completely random number of years ago. It might be close to 100 or 150 years, but if so, it's a coincidence. It's usually quite random.

Now pick a fictional historical event. How long ago was that, compared to when the characters first mentioned it? Usually, 20 years, or 50 years, or some number divisible by 5, and if not, then 3 years, 7 years, 10 years, or 12 years.

Writers are busy people. Not all of them have the time to think up random dates for each notable event. Some writers downplay this trope by making it "roughly" a round number of years ago, but they won't actually say how many years ago it really was. If a character in the story casually mentions how long ago an event occurred, it may be understood that the figure is approximate. A common way of justifying this trope is to make the event's first mention on an anniversary.

Often used with Time Skips and Distant Prologues or Epilogues. Not to be confused with Exty Years from Publication, which is about the year in the work being directly linked to the year it was made, or Year X, which is when dates in-universe contain the letter X in place of digits. See Arc Number for when the same gap of time appears repeatedly. Super-Trope to 10,000 Years and Thousand-Year Reign.