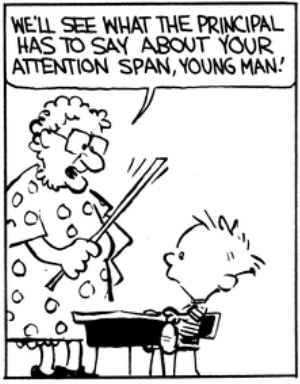 "Transfiguration is some of the most complicated and dangerous magic you will learn at Hogwarts. Anyone messing around in my class will leave and not come back. You have been warned."
— Minerva McGonagall, Harry Potter
Advertisement:

For the Evulz? Not on their watch.

Unlike a Sadist Teacher, the Stern Teacher is always "tough but fair": a person who's got high expectations but is ultimately a Reasonable Authority Figure. The students might not be too fond of them personally, but they always respect them in the end and often achieve the best results in education (which does make it Truth in Television). While cold and aloof at first glance, a stern teacher truly loves and cares for their students deep beneath and genuinely wants them to succeed in the best way possible at life.

Teachers of this type are firm believers of You Are Better Than You Think You Are, but, befitting their just-yet-harsh nature, they will always use the more firm version of the aforementioned trope.

Interestingly, in cases where a good teacher is forced by circumstances to teach their own child or other younger relative, they will adopt this persona to a greater degree with their relative than with the other kids, as an (over) reaction to the Embarrassing Relative Teacher stereotype.

Dmitry Vladimirovich Beklemishev, a near-legendary figure at MIPT (roughly, the Russian equivalent of MIT) once said in an interview that he tried many personas on during his long teaching career and found this one to be the most effective for the purpose of doing a superb job.

Sergeant Rock is the military version of this. Compare also with Tough Love.