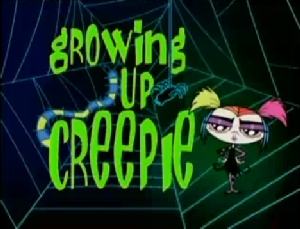 Middlington Middle School. An ordinary school filled with ordinary kids without the ordinary problems of growing up. But in my case, life is anything but ordinary. You see, I was raised by bugs. Get the picture?
— Opening Narration
Advertisement:

Growing Up Creepie, also known simply as Creepie, is an animated Horror Comedy edutainment series produced by Discovery Kids that aired from September 2006 to June 2008.

The show follows a young Goth girl named Creepella "Creepie" Creecher who was orphaned as an infant and raised by the thousands of insects that reside in an old, decrepit mansion. Upon hitting adolescence, she's finally given license to attend middle school with other human children, only to discover that much of her species is surprisingly entemophobic. As such, as she attends Middlington Middle School and makes new friends, she must keep the true nature of her home life secret in order to protect both herself and her family.

, and despite how the episodes are labeled there, this is a Two Shorts cartoon.

Tropes represented on this show: