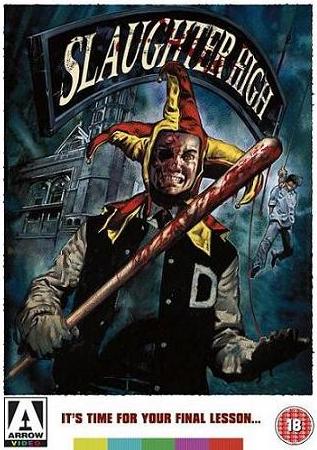 When you name a school that, this sort of thing is to be expected.
There's Horror in the Halls... Lynching in the Lunchroom... Murder in Metal Shop.
Advertisement:

Slaughter High is a British (despite how hard it tries to not look it) Slasher Movie released in 1986, and made by the people who brought you Pieces and Don't Open Till Christmas (and apparently Friday the 13th, or so they claim). It concerns the misadventures of bully target Marty Rantzen, a nerdy student at Doddsville High. A Deadly Prank ends up costing Marty his visage, and he is ultimately committed to a mental hospital due to the trauma.

Five years later, and after several unsuccessful attempts to fix his face, Marty escapes, and has a lethal class reunion at the now-closed high school.

The curriculum at Slaughter High includes: