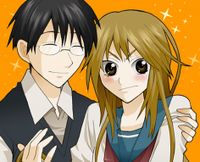 Manabu and Reina. Actually, you could call them Megane-kun and Yankee-chan, if not for copyright issues.
Advertisement:

Tanaka Manabu is a regular honors student. On the way to school, he meets a girl carrying a bloody bat. That girl is Ryuuzaki Reina, leader of the school's female delinquents. It's love at first sight. Yandere Kanojo is a gag manga (with a combination of yonkoma and normal page) about having a yankee dere-dere girlfriend.

NOTE: The title of this series isn't read as "Yandere" but as the combination of "yankee" + "dere-dere". In this sense, 'yankee' means troublemaker, not American.

Not to be confused with Onidere, which is only strikingly similar to this series in setup.