Pair the Smart Ones 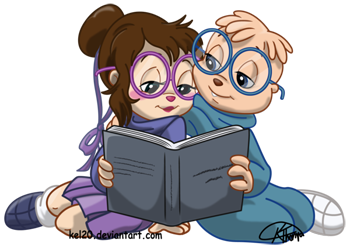 . Used with permission.
Pierce: Hey, I was thinkin', we might die here. Anything y'all want to get off your chest?
The Boss: Come on, Pierce; don't go talking like that.
Oleg: No, he's right. Were Kinzie here, I would pour out my heart.
The Boss: WHAT?!
Oleg: It is rare that I find an intellectual equal.
— Saints Row: The Third
Advertisement:

If a show features two highly intelligent characters of similar age and compatible sexual orientation, chances are they'll end up together. Works particularly well if they're Teen Geniuses. An in-universe invocation of the Geeky Turn-On.

It's common for such relationships to start cleanly and quickly, avoiding Will They or Won't They? altogether, and proceed somewhat more smoothly than whatever other characters may be in a relationship, thus often turning them into a Beta Couple. Apparently, love doesn't make you dumb if you're a genius. There's some Truth in Television in this - Commonality Connection often makes relationships run more smoothly.

If the writers don't do it, the shippers will.

Subtrope of Birds of a Feather. Contrast Pair the Dumb Ones. See also Genius Breeding Act, which is where a government tries to force or motivate this.