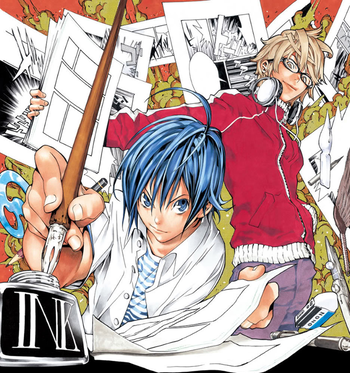 "A manga just has to be interesting. If it's interesting, of course it will get serialized."
— Hisashi Sasaki, Editor-in-Chief
Advertisement:

Moritaka Mashiro is a typical teenager: bored with life and unsure about his future. He spends his free time drawing, inspired by his mangaka uncle, who had only a single successful series before his death. One day while sitting bored in class, he sketches a picture of his crush, Miho Azuki, and forgets his notebook in the classroom. The notebook is found by Akito Takagi, who proposes that he and Mashiro become mangaka themselves, with Mashiro using his impressive artistic skills and Takagi writing the plots.

As luck would have it, Mashiro finds out that Miho wants to be a voice actress, and he asks her to voice the main heroine of his and Takagi's manga once it becomes a successful anime. Caught up in the moment, he goes on to propose to her! Much to everyone's surprise, she agrees to marry him, but only once they have both achieved their dreams. The story thus follows the mangaka duo's rise to fame from their first attempts in middle-school to their mid-twenties, as well as a colorful gallery of rival authors in the Jump.

Created by Tsugumi Ohba and Takeshi Obata, the creators of Death Note and themselves an artist/writer combo. The manga ran from August 2008 to April 2012 with 176 chapters, amounting to 20 Volumes of material.

in the spring of 2014 that production has started on a live-action adaptation, which was released in 2015.

Compare it with Shirobako. Both offer a stylized 'inside looks' at the world of Manga and Anime creation. Ah... and Mm... Are All She Says is specifically about the eromanga industry.

Not to be confused with Bakugan or Batman. Or Pac-Man.