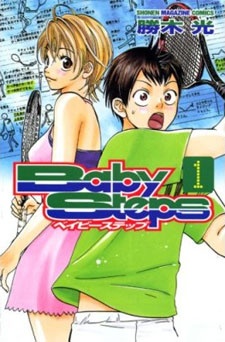 Maruo Eiichirou is a model high school student. Known by his classmates as “All-A” or “Ei-chan”, Eiichirou has a reputation for being studious and a perfectionist. Pretty much dedicating his entire life to studying, cram school, and school committee meetings, everything he does is to further his goal of becoming a successful, responsible adult. He’s even recently decided to start exercising… to make getting around easier when he goes to university, of course.

One day while checking out a local tennis center, Eiichirou runs into Takasaki Natsu, a popular girl from another class who is widely considered to be the school's idol. Having only met Natsu once before and gotten the impression that she was a bit irresponsible, Eiichirou is surprised to see her playing tennis with determination and skill. She convinces him to try playing a few rounds with her club, but E—chan quickly learns that even their warm-up routine is too grueling for him to compete with.

While talking with Natsu afterward, Eiichirou finds out that tennis is not just her hobby… she plays with such passion because it is her dream to one day become a professional player. When she compares her dedication to the sport to his studying, Eiichirou realizes that the two are entirely different. He’s not really sure why he is so hard-working and diligent. In fact, he’s not even sure if he has any dreams for his future.

At that moment, Eiichirou decides that he will give tennis a try as well, both in order to understand what drives Natsu to play the way that she does and, hopefully, to see if he can find a passion of his own.

Baby Steps is a sports manga written and illustrated by Katsuki Hikaru. Debuting in October of 2007, this series ran in Weekly Shonen Magazine until 2017 and is published by Kodansha. An anime adaptation began airing in April 2014 on NHK's educational channel.