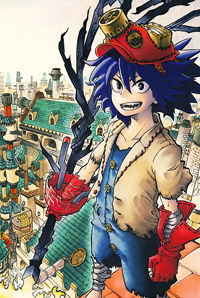 Astro and the Org.
Advertisement:

The Battle Star is the last remaining bastion of humanity, besieged by alien forces. Raiders and marauders take what they wish, with the once-mighty empire of Industria reduced to a single city.

Astro doesn't care about any of that, however. He's a street urchin who takes in any orphan he finds, and works to earn enough money so they can all eat.

One day, a boy who looks exactly like Astro pops up. He is Barragenote Transliterated as Bulge by scanlators., Prince of Industria, but he is tired of his role and his father. So he gives Astro the Org, the Ancestral Weapon of the royal family, and runs off to live a life free of responsibility. He is immediately shot.

Astro ends up dragged to the royal palace, where everyone realizes quite quickly that he is not the rude and ill-mannered prince. But the Org reacts to him, so he is charged with freeing the Battle Star from petty tyranny by traveling the land defeating anyone oppressing the weak. The captain of the royal guard, Tiamat, is sent with him to ensure his safety.

The second mainstream manga of mangaka Kohei Horikoshi. Started and ended in 2012 with 16 chapters due to low readership. It was picked up by Viz for an American release however and covers at least two volumes.

Alternative Title(s): Bulge Of The Battle Star, Sensei No Bulge