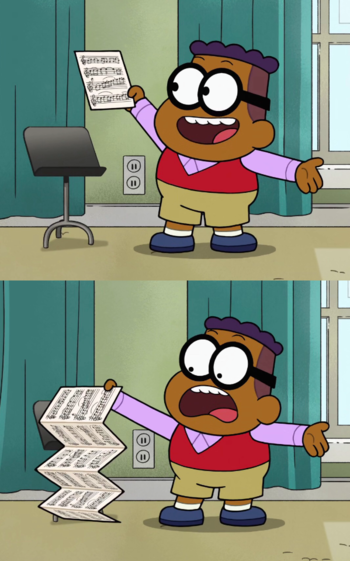 And to think, he believed a "single sheet of music" would determine his future.
"They really should put the warnings before the spell."
— Doctor Strange
Advertisement:

Often, a written/typed message only makes sense if it is read all the way through. However, not everyone has the patience to finish reading. They'll fasten on the part of the message they saw first, and act upon it, not realizing that there is more important information in the rest. Often justified in fiction by the writer of the message using poor syntax, Wall of Text, or "burying the lede" so that the most important information is on the next page. May lead to Dramatic Irony (as the audience often gets to see the rest of the info), Cue Card Pause, and Worse with Context (or Better With Context).

This can also apply to audio or video recordings, and communication transmissions (i.e over the phone, or with a Voice with an Internet Connection).

Compare and contrast Prophetic Fallacy, Lost in Transmission, Conveniently Interrupted Document, Plot-Based Photograph Obfuscation and Plot-Based Voice Cancellation for when it's not the fault of the reader/watcher/listener, but rather the document/transmitter itself.

Not to be confused with Slow-Paced Beginning, when the audience stops following a story too soon.

Letter From the Grandparents

Letter From the Grandparents