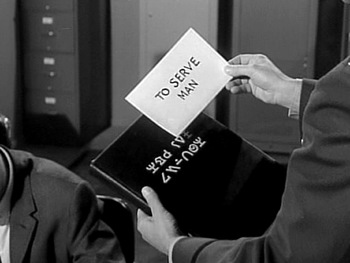 It's a cookbook!
Advertisement:

Based on the original short story by Damon Knight.

The Trope Namer for To Serve Man.

And, let's be real here, you know the punchline already. But, for the heck of it:

Rod Serling: Respectfully submitted for your perusal: a Kanamit. Height: a little over nine feet. Weight: in the neighborhood of three hundred and fifty pounds. Origin : unknown. Motives? Therein hangs the tale, for in just a moment we're going to ask you to shake hands, figuratively, with a Christopher Columbus from another galaxy and another time. This is the Twilight Zone.

The episode opens with a man named Michael Chambers lying uncomfortably on a cot in a futuristic room. A voice implores him to eat. He refuses. He asks what time it is on Earth, and begins to tell the story of how he came to be aboard a spaceship in flashback.

A race of benevolent aliens called the Kanamits arrive on Earth, offering to help humanity. After initial resistance, humanity accepts. The Kanamit set about putting an end to many of Earth's greatest woes, including war and hunger. Energy becomes very cheap; nuclear weapons are rendered harmless. The aliens even morph deserts into big, blooming fields.

Michael Chambers, revealed to be a codebreaker for the United States government, attempts to decipher the Kanamits' language from a book the Kanamit left behind. A woman named Patty, one of his employees, manages to decipher the title, which reads To Serve Man. Chambers' team seems to be satisfied with this.

With the Cold War ended, Chambers has no real work to do, but Patty is still trying to work out the meaning of the text of To Serve Man.

Soon, humans are volunteering for trips to the Kanamits' home planet, which is portrayed as a paradise. Chambers, with nothing else to do, signs up for an excursion to the planet. As he is boarding the ship (amongst people who excitedly talk about their upcoming trip), Patty runs up to him, but is stopped by a Kanamit guard. She desperately calls out:

Advertisement:
"Mr. Chambers! Don't get on that ship! The rest of the book, To Serve Man, it's... it's a cookbook!"

Before Chambers can escape, he is forced onto the ship. The episode ends with him on the Kanamit ship, breaking his hunger strike and giving in to the Kanamit's orders to eat.

Rod Serling: The recollections of one Michael Chambers, with appropriate flashbacks and soliloquy. Or more simply stated, the evolution of man, the cycle of going from dust to dessert, the metamorphosis from being the ruler of a planet to an ingredient in someone's soup. It's tonight's bill of fare on the Twilight Zone.