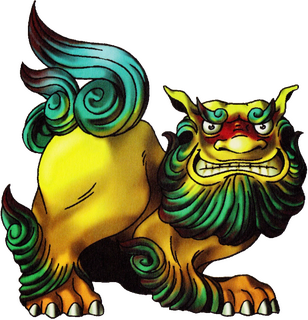 Chinese guardian lions, also termed stone lions, lion dogs, foo/fu lions/dogs, temple lions, temple dogs, shíshī ("stone lion") or tóngshī ("bronze lion"), are a traditional Chinese architectural motif in the form of large stone or metal statues of crouching leonine beasts typically placed in pairs at the entrance of important buildings, such as palaces, temples, and tombs, under the belief that they will protect their post from spiritual and physical harm. They traditionally come in pairs, one holding a ball under one paw and the other with a cub on its back. They are intended to resemble lions and referred to as such in Chinese and neighboring languages, but their stylized appearance (in part due to lack of lions but plenty of large dogs as references) has led Western observers to mistake them for dogs as well.
Advertisement:

In fiction, these statues are often portrayed as living creatures in their own right. The most common interpretations depict them as either magically animated Living Statues or as a type of celestial or divine beings. The second type in particular may more or less closely resemble the regular statues; some are simply fleshly versions of the real-life statuary, while others are simply large, magical lions or dogs. Regardless of type, they're commonly depicted as guardian entities that keep watch over specific places or, more occasionally, people, which they protect from harm and malign influences. The animated statue variant is usually a mindless construct built as a magical security system of sorts; the living variant, by contrast, is more commonly depicted as holy or divine beings, intelligent and righteous and fiercely opposed to evil and malign magic.

These creatures tend to be freely appended to East Asian cultures, their Fantasy Counterpart Cultures and theme park versions thereof, including ones not actually based on China itself. In some cases this is justified, as the original artistic motif spread from China to most of its neighbors and statuary derived from the original stone lions is now fairly widespread — examples of these variants include the Japanese komainu, the Okinawan shisa, and the Myanmari chinthe, which share most of the same traits as the Chinese variant. In other cases, especially when the creatures are directly based on the Chinese style and version, it's more likely that the work's creators just didn't do their research.

For these creatures' usual home grounds, see Wutai and the Far East. Often overlaps with Panthera Awesome, Evil-Detecting Dog and sometimes Cats Are Magic. See also Bakeneko and Nekomata and Maneki Neko for the feline-like creatures prevalent in East Asian cultures, and King of Beasts for another positive portrayal of lions in fiction. Contrast Hellhound. For another mythical creature with similar origins, see the qilin or Kirin. See also Our Gargoyles Rock and Shedu and Lammasu for Western and Middle Eastern cases, respectively, of mythical creatures derived from statuary.

Not to be confused with the group of primarily Asian dog breeds that were bred with copious fur in part because it made them look like lions (e.g.: the Lhasa apso, the shih tzu, the pekingese, the chow chow, the Tibetan mastiff).