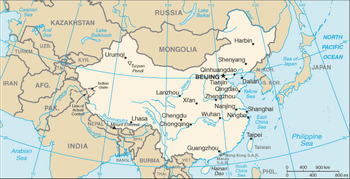 If we didn't include Taiwan, we'd be Banned in China.note Technically, this map still fails to include South Tibet (Most of Arunachal Pradash administered by India today) or denotes Chinese ownership of South China Sea Islands; however nobody cares unless a website (or its users) actively politically oppose Chinese officialdom.
"Let China sleep, for when she wakes she will move the world."
—attributed to Napoléon Bonaparte, though we don't actually know who really originated it
Advertisement:

A huge East Asian country, when people mention "Asia", the first country to pop up in your head, is probably going to be China (Chinese: 中国, Zhongguo), officially the People's Republic of China (PRC) (Chinese: 中华人民共和国, Zhonghua Renmin Gongheguo). This has become so common that for some people, China is synonymous with Asia, much to the annoyance of everyone who isn't ignorant. As the most populated country in the world and third largest in area after Russia and Canada, and with an economy on the rise daily, the People's Republic of China is a country well worth understanding better, partly to avoid the many stereotypes of the country and the Chinese people over the years.

The proto-Sino-Tibetan people likely originated at the middle Yellow River of northern China and split around 6,000–8,000 years ago into the proto-Tibeto-Burman and proto-Sinitic branches. The proto-Tibeto-Burmans headed westwards while the proto-Sinitics remained in northern China. The proto-Sinitic tribes that lived by the Yellow River underwent extensive cultural and technological advancements largely due to the unpredictability of the river on which they depended on. The early Sinitic-speaking agricultural tribes from the Yangshao culture eventually formed a confederacy with the Liao River people from the Hongshan culture to their north. The two river cultures had interacted with each other extensively before the people of the Hongshan culture made a southward migration to the Yellow River likely due to climate change.

Chinese culture was more strongly influenced by the Yangshao people in terms of language, silk production, millet agriculture, and pottery making, but with the religious practices of the Hongshan people. Thus, early Chinese religion was shamanistic. Shamanism would lose its importance after the Shang Dynasty, but the grand religious ceremonies and rituals of the Xia such as dragon worship and feng shui would remain. Combined, the Yangshao and Hongshan became known as the Huaxia. With the Hua in the name meaning "illustrious" in reference to their elaborate clothing (the Yangshao people were involved in silk production) and the "Xia" meaning "grand" in reference to their ceremonial etiquette (the Hongshan people had complicated religious rituals).

The Huaxia began to conquer surrounding territories and absorb foreign populations which allowed for their expansion. The Huaxia would go on to form empires with the Qin Dynasty being the first unified Chinese empire. The Han Dynasty is considered one of the early great eras of Chinese civilization. Thus, the Huaxia would go on to call themselves "Han people" and are known as the "Han Chinese" in English. Over thousands of years, the Han Chinese made a continuous expansion out of their homeland - primarily in a southward direction where they assimilated the native inhabitants of the Yangtze River. The Han Chinese even reached as far as central Vietnam and they ended up ruling Vietnam for over a thousand years.

Today there is a genetic cline in China — Northern Han Chinese have highly uniform paternal and maternal lines, being a very genetically homogeneous group that formed about 3000 years ago, while Southern Han Chinese have similar paternal lines to the Northern Han but more diverse maternal ones. The Northern Han are the greatest contributors to the Southern Han gene pool, but the southern Han have a large portion of maternal ancestry derived from pre-Chinese indigenous populations, primarily the ethnic groups of the Yangtze River. This indicates an extensive practise of intermarriage between Han and non-Han women.

Chinese prehistory is still largely a mystery due to it being centered around the Yellow River, which was a poor region for archaeological preservation. The details are still hotly debated today. Even what is "common knowledge" now may be outdated in the next few years.

What is far better recorded is the period known as Imperial China, starting from the Qin, China would have a dynastic imperial system of governance for the next 2000 years. The Chinese state would constantly alternate between periods of extreme chaos and peaceful golden eras as it fractured and reunited over time. China was the dominant cultural powerhouse of East Asia for most of its existence. Although ironically, the best known Chinese eras to Westerners were the foreign dynasties of the Yuan and Qing due to Marco Polo's adventures in Yuan China and because China was being brutally colonized by Western powers and Japan in the Qing — these were the periods when China was arguably at it's "least Chinese" and it contributed to the poor understanding the West had of the nation. Even today the West is largely ignorant of Chinese history with its preference to undervalue Chinese studies due to the bad blood that generated between China and the West starting from the late Qing.

In 2003, China became the third nation to have sent a man into space with its own rockets. The President and Vice President of the People's Republic of China serve for five year terms with no term limits; this, plus the lack of political opposition, basically allows them to serve for life. However, true authority lies with the General Secretary of the Central Committee of the Communist Party of Chinanote The Chairman's and Vice Chairman's seats were abolished, hence why the General Secretary now holds the highest authority in the party. while top military command goes to Chairman of the Central Military Commission, a role usually also hold by the General Secretary who's usually elected as the President (still known as the State Chairman in Chinese). Basically one has to hold these three positions to gain full power of the head of government of China. The General Secretary is secretly decided by the Communist Party. 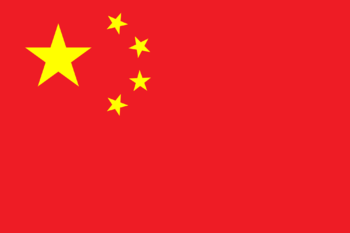 The red field is a historic color of communism, but also of the ethnic Han; the four golden stars apparently surrounding a larger star symbolize the peasants, workers, the middle-class and patriotic capitalists guided by the Communist Party of China.
National Emblem of the People's Republic of China 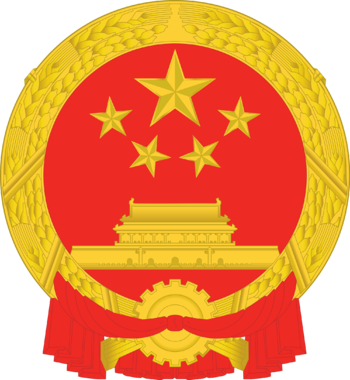 March of the Volunteers

The March of the Volunteers is the national anthem of the People's Republic of China.

March of the Volunteers

The March of the Volunteers is the national anthem of the People's Republic of China.