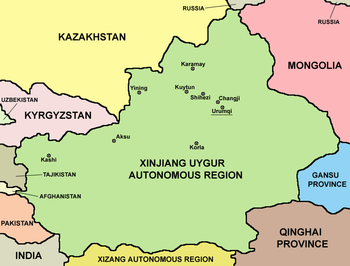 Xinjiang (Uyghur: شىنجاڭ, SASM/GNC: Xinjang, Chinese: 新疆, pinyin: Xīnjiāng), called the Xinjiang Uygur Autonomous Region (XUAR), is the largest and westernmost first-level administrative division of China, with Ürümqi as its capital and largest city. It is an autonomous region, as the majority of the population consist of non-Han Chinese, and is the westernmost part of East Asia and The Far East.

The province is made up of two regions: the northern Dzungaria and the southern Tarim Basin, with the Tian Shan mountains serving as their natural barrier. Dzungaria is steppe and mountain country and was mainly inhabited by nomads of the Eurasian Steppe until recently, whereas the Tarim Basin — containing the fertile oases surrounding the extremely arid Taklamakan Desert — has a long history of being settled by sedentary agriculturalists. The primary cities of the Tarim include Kashgar, Khotan, and Yarkent.

Xinjiang was the location of the most-well known route of The Silk Road, historically making it a hotly contested territory. In the 1st millennium BCE, it was home to several Indo-European tribes, whose Caucasian features (blond hair, blue eyes, etc.) were noted by the ancient Chinese. They sold precious metals to the Chinese, notably jade. In the 200s BCE, the Xiongnu invaded the region and pushed some tribes to Central Asia, triggering a chain reaction that eventually led to another IE people, the Iranian Saka, to settle in the southern rim of the Tarim, where they established the Khotan Kingdom. By then, the region had been a part of the Han dynasty's Protectorate of the West, following the defeat of the Xiongnu. In the 2nd century CE, the Kushans of Bactria introduced Buddhism to the Saka. Through them, the religion was further introduced to East Asia. According to records, the Tocharian people started to appear in the northern rim of the Tarim around the same time and were likewise Buddhist. The Tocharians are of great interest to IE linguists, since their existence destroyed the commonly held belief that the IE family is divided into a "Western" (centum) and "Eastern" (satem) branches, with the dividing line located somewhere in Eastern Europe. This is because the Tocharians spoke centum languages, even though they were the easternmost IE people in the ancient period.

During the second half of the 1st millennium, Xinjiang was the battleground between the Chinese, Tibetans, and nomads. In Dzungaria, the Turkic Uyghurs prevailed, assimilating the Tocharians and pledging vassalage to the Khitan dynasty. Meanwhile, the southern Tarim was invaded in the 10th century by the Kara-Khanid Khanate, who Islamized and Turkified the Saka. Following the conquest of Genghis Khan, Xinjiang as a whole was allotted to the family of his second son, Chagatai, and henceforth known as the Chagatai Khanate. The Chagatai (and its successor, the Moghulistan Khanate) subjugated the Uyghurs and Islamized parts of Dzungaria. Note that during that period, "Uyghurs" and "Muslim Turks of Xinjiang" did not mean the same thing. The old Uyghurs mainly adhered to Manichaeism and spoke a language from a different Turkic subgroup (Siberian) than the Muslim Turks (Karluk). The appellation of the Muslim Turks as "Uyghur" only began with the nationalist movement of the early 20th century; before then, as with other Central Asian Turks, they were identified based on their occupation and place of origin.

In the 17th century, the Dzungars, an Oirat Mongol tribe, displaced Moghulistan as ruler of Xinjiang with the help of Les Collaborateurs from the Tarim Basin. They picked fights with tribes from the Mongolian heartland, who asked Qing China for help. The Qing invaded and razed Dzungaria in 1758, which indirectly completed Xinjiang's Islamization, as Turks of the Tarim were brought in to repopulate the region. Han Chinese settlers were also brought in, albeit to a lesser extent compared to today; by 1933, they constituted less than 10% of the population, a far cry from today, where their numbers evenly match the Uyghurs. Under the Qing, Xinjiang was site of the Dungan Rebellion, bringing the Qing into conflict with Tsarist Russia.

The fall of the Qing dynasty in 1912 brought chaos to the region. A series of rebellions arose in the province during the early 1930s after the governor, Yang Zengxin, was assassinated, with a short lived First East Turkistan Republic being declared in Kashgar, before the Nationalist Chinese army brought it down the next year and executed the two Emirs of the Republic, Abdullah Bughra and Nur Ahmad Jan Bughra. The Soviets then invaded Xinjiang, and the entire province was taken over by northeast Han warlord Sheng Shicai during the Xinjiang War, who ruled it the next decade with close support from the Soviet Union, with the Soviets maintaining a military base there and having several military and economic advisors deployed in the region, and many of whose ethnic and security policies Sheng instituted in Xinjiang.

In 1944, the current President and Premier of China, Chiang Kai-shek, was informed of Sheng Shicai's intention of joining the Soviet Union by Soviets, and decided to shift him out of Xinjiang to Chongqing as the Minister of Agriculture and Forest. The Soviets weren't so eager on giving up their attempts to take Xinjiang, however, and backed Uyghur separatists to create the Second East Turkistan Republic in Ili region while Xinjiang was under Republic of China Kuomintang control. The People's Liberation Army then entered Xinjiang in 1949, and the province was surrendered to them by the then Kuomintang commander Tao Zhiyue and the government’s chairman Burhan Shahid, with the province later being replaced by the autonomous region on October 1st, 1955.

Nowadays, Xinjiang is China's largest natural gas-producing region, and abundant oil and mineral reserves have been located there. However, occasional clashes between the government and Uyghur separatists terrorists cause unrest in the region, as well as ethnic clashes and attacks by radical Islamists. The region has also caught international attention and infamy for accusations of what some describe as an ethnic cleansing of the Uyghurs by the Chinese government, with alleged concentration camps for them being set up there. Others describe it as a ruthless but necessary crackdown on terrorism inspired by the American War on Terror

Due to the explosive political situation in this area, most fiction that takes place in this region never uses the name "Xīnjiāng" and it is generally referred to as simply "western China." Anything more specific may provoke action by Chinese censorship organs, especially media that is meant to be consumed in the country. 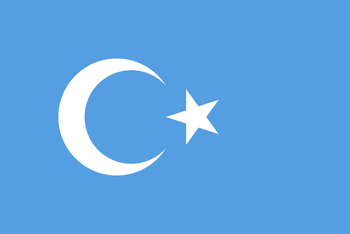 This flag is a symbol of the East Turkestan independence movement, and is prohibited by the Chinese government. It resembles the Turkish flag, and consists of a crescent and star historically representing Tengrism on a blue field, the blue representing the Gökturks (Celestial Turks), a group of ancient nomadic Turkic peoples.