Useful Notes / The Other Chinese Army 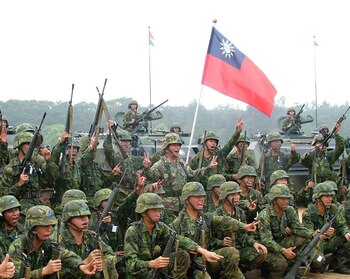 The Republic of China Armed Forces is the military of WWII era China and later Taiwan.

As the National Revolutionary Army

It started from the Guomindang National Revolutionary Army. Their first officers and NCOs were trained under Chiang Kai Shek by Soviet advisors like Major-General Borodin (many of whom were later sent to the Gulags in 1937-8 for the 'crime' of having lived overseas). These forces initiated the Northern Expedition of 1926-28, during which two thirds of the initial NRA crushed the other third (which was led by Wang Jingwei and other leftists within the party). In 1931 they fought the Central Plains War against three (Wu Peifu of Anhui, Yan Xishan of Shanxi, and the Guangxi Clique) of the five (Zhang Zuolin of Manchuria, Long Yun of Yunnan) major warlord factions left in China and won, ending General Wu Peifu as a political force. When in 1930 the Manchurian Warlord Zhang Xueliang (son of Zhang Zuolin) accidentally started a border war with the Soviet Union, NRA forces fought alongside Zhang's in an attempt to defend his territory (and failed, though the Soviets imposed very lenient peace terms). A year later the Japanese Guandong/Kwantung Army Command annexed Zhang territory, ending him as a political force and forcing him to join the NRA with the remainder of his troops.

In 1932 a series of protests over Japanese Imperialism turned hot and became the Shanghai Incident, in which several thousand NRA and Japanese troops fought a limited street-to-street battle in the city. The NRA's performance was so abysmal that Chiang Kai-shek contacted Weimar Germany and made a deal with them to send them Chinese raw materials in exchange for German weapons, weapons blueprints, armaments factories (yes, factories), and experienced army staff officers who could help him reform the NRA. Alexander von Falkenhausen (who'd been military governor of Belgium in World War One) then headed a team who helped reform some parts of the NRA which were loyal to Chiang just in time for the Second Sino-Japanese War in 1937.

During the Second Sino-Japanese War the NRA underwent a second major change when von Falkenhausen's team was forcibly recalled in 1938 and replaced, once again, by Soviet advisors and war material. Soviet aid was so extensive that the NRA actually ended up with more weaponry than they'd had before their horrific losses in the 1937 Battle of Shanghai, but this was undermined by the inexperience and illiteracy of the replacement officer corps and the NRA's increasing inability to pay and feed their troops due to the loss of more than 90% of their pre-war income (which had come from customs duties and taxes on the major cities, all of which were now in Japanese hands). The presence of the Red Air Force was also a mixed blessing, since the Soviets were more interested in using combat in Chinese airspace to train their new pilots than they were in actually protecting Chinese cities from Japanese strategic bombing.

The NRA underwent a final change in the last months of World War II. Although Joseph Stilwell had trained and equipped 100k NRA troops to the standards of a US Army fighting force, these troops were stuck in northern Burma and could do nothing to help defend China herself from Japanese attacks. When Stilwell was fired, his replacement General Wedemeyer allowed some of these troops to be moved to China and helped train and arm other NRA forces there as well. This programme ended when the war did, and although the USA shipped the NRA all the weapons, equipment, and food they couldn't be bothered shipping back to the USA (for free!) no more US training or staff-help was forthcoming. At this point NRA forces were equipped with a bewildering array of German, Soviet, Japanese, and US equipment and trained and headed by officers of vastly different standards, with various loyalties to boot. Two of the old warlord factions (Yan Xishan, the Guangxi Clique) only got stronger during the war, leaving the NRA in a bad way for the Chinese Civil War of 1946-50. Which they lost. Isolated islands (like Hainan) held out until mid-1950 and remnant NRA forces would continue guerilla warfare in western Xinjiang and along the Burmese-Chinese border for several decades (with CIA funds and weaponry), but the NRA basically only existed on Taiwan after that point.

As the ROC Armed Forces

The ROC allegedly sent some special forces against the Chinese Communists in the Korean War through Burma, but this was never proven (though these could merely have been confused with the remnant-ROC forces already operating there). They also sent advisors to Vietnam.

The ROC military is composed of the Army, the Navy, the Marines, the Air Force, and of all cases, the Military Police. The Coast Guard is not under the jurisdiction of the Ministry of Defense but may be attached in wartime.

Conscription was the rule; every 18 year-old, able-bodied male had to serve. In the last few years, the term of service has been regularly shrinking, however...

It has its own indigenously designed F-CK-1 Ching-kuo jetnote Developed because US export restrictions prevented both the F-20 Tigershark (designed largely with sale to Taiwan in mind) and the F-16 Viper (exported to practically everybody else) from being sold to the ROCAF. So they made their own instead. and Tuo Chiang-class stealth corvette.