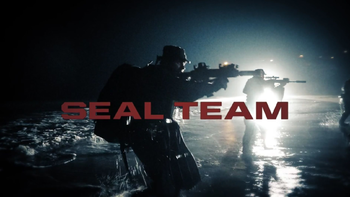 Out of the water and into the fray.
Advertisement:

SEAL Team is a CBS drama series starring David Boreanaz that began airing in 2017. The production crew has gotten help from serving SEAL operators in making sure that operational procedures are accurately portrayed.

The show follows a group of US Navy Special Warfare Operators within DEVGRUnote popularly known as Seal Team Six, led by Master Chief Petty Officer Jason Hayes, as they're deployed all over the world to ensure the safety of the United States while also trying to cope with the loss of the one of their own during a mission. In addition to the stress of going into life-threatening situations for a living, they must also deal with family drama at home, frequently finding that it can be easier facing down an armed enemy than it is trying to keep wives and children happy.

Running parallel to these stories are the trials of Clay Spenser, already an experienced SEAL, as he tries to find his place within DEVGRU. Making things difficult for him, however, is that his reputation is pre-tarnished due to his father, a SEAL veteran, writing a tell-all book about his time in the teams.

Season 4 concluded on May 26, 2021. The show has been renewed for a fifth season. After the first few episodes of Season 5, which will constitute its network television finale, the series will move to Paramount+.