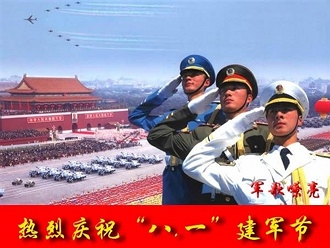 Air, land, or sea; They're all in the Army.
"During the Damansky Island incident

the Chinese military developed three main strategies: The Great Offensive, The Small Retreat, and Infiltration by Small Groups of One to Two Million Across the Border."
— Russian jokenote It should be noted that this is a caricature of Chinese strategy, as one might expect from a joke told about them by their enemies.
Advertisement:

When the People's Liberation Army's 'Pingjing' Campaign to crush the 'Beiping' (now 'Beijing')-Tianjin pocket of 500,000 Kuomintang troops was complete, it established itself as the dominant military power in China. After breaking the KMT's defensive line on the Yangzi, they went on to accomplish total victory over the Kuomintang in just a year - bringing the Chinese Civil War to an end after 34 years of warfare and 8+ million dead. When taken together with the 10-20 million dead of the Second Sino-Japanese War this left Communist China as the one of the most war-devastated states in the history of the entire world. It also left her with the second-largest military after that of the Soviet Union.

Being the country with the largest population in the world, it's not surprising that China has more active-duty and reserve military personnel than any other nation, with nearly three million serving in the PLA. In addition, China also maintains around one and a half million para-military personnel in the form of the People's Armed Police, although the PAP is not part of the PLA, instead answering to the State Council. As a proportion of its population, however, China's armed forces are not large; many countries, including the US, have a higher percentage of their populations in uniform.

Technically, military service with the People's Liberation Army is obligatory for all male and female Chinese citizens, but in practice the supply of volunteers is such that conscription has never been enforced. All eighteen-year-olds have to register themselves with the government authorities, in a manner somewhat similar to the Selective Service System of the United States. Chinese soldiers and armed police swear the following oath of loyalty:

"I am a member of the People's Liberation Army. I promise that I will follow the leadership of the Communist Party of China, serve the people wholeheartedly, obey orders, strictly observe discipline, fight heroically, fear no sacrifice, loyally discharge my duties, work hard, practice hard to master combat skills, and resolutely fulfill my missions. Under no circumstances will I betray the motherland or desert the army."
Advertisement:

You will notice this oath places the Communist Party first, ahead of both the people and motherland. For this reason, it has raised eyebrows among more apolitical militaries.

China has reasonably capable air forces, but only in its local region. Most of its technology is Soviet in origin, starting from the Mig-17 to the newest order of 48 Su-35s. The naval branch is medium sized and transitioning from a primarily coastal defence force to one with regional capability. More modern nuclear submarines and aircraft carriers (the first one is the Liaoning, a retrofitted former Soviet aircraft carrier) are much-discussed potential additions. The PLA also has ASBMsnote anti-ship ballistic missiles; exactly how suitable a long-range ballistic missile is for attacking a moving target remains uncertain, but they'd certainly be harder to shoot down than ordinary anti-ship missiles, missiles to destroy aircraft carriers. Aircraft carriers are seen as a top priority for the PLAN, largely as a matter of national prestige; Chinese officials have expressed the belief that "all great powers have aircraft carriers", and thus consider it essential that China must have them.

Currently, China has been making huge pushes to modernize their armed forces to be able to compete with the United States. In addition to trying to build their own blue water navy, China has developed its own homegrown stealth jet. The PLAAF now have a prototype for a fifth-generation (according to Chinese sources) stealth fighter. It is nicknamed by Chinese bloggers and military forumgoers as "黑丝带" "Black Ribbon" and "Mio". The first nickname is because it's black and a fourth generation fighter, and ribbon (丝带, Sīdài) sounds like fourth-gen (四代, Sìdaì) in Chinese, and "Mio" is born from a random comment on how much this plane's shape looks like the hairstyle of... Mio Akiyama from K-On!. It's now known as the J-20 (The J comes from the first letter of the pinyin romanisation of 歼击机 (jiānjījī), the Chinese for "fighter-plane", so it's the equivalent of F in American aircraft designations).

Despite the trope name, the Chinese do not employ attack helicopters and gunships in the same manner as the U.S. or Russia, and most Chinese "attack" helicopters are utility helicopters that have been refitted to fulfill support roles. This is expected to change following the introduction of China's first true dedicated attack helicopter, the Z-10

, which is nicknamed 城管, or "Urban Management Chopper" for a joke that the chopper might be deployed by law enforcement offices to use them on street vendors. The Z-10 was designed by the Russian firm Kamov (despite lacking the usual Kamov trademark of coaxial rotors) but will be manufactured exclusively in China. A second dedicated type WZ-19, upgraded from Z-9 or Eurocopter AS365, is also being deployed.

The standard rifle is the QBZ-95-1, QBZ-95 (bullpups) and QBZ-03 (an improved Type 81 design) rifle, all of which fire a 5.8x42mm round that is slightly more powerful and longer-ranged than either the NATO 5.56x45mm or Russian 5.45x39mm rounds. Older rifles such as the Type 81 or Type 56 (AK-47) are used for training purposes or in secondary forces. The PLA is also testing an OICW weapon system based on the QBZ-03 and features of the French FELIN system. Recently, the QBZ-95 has started to be phased out in favor of the QBZ-95-1, starting with the Hong Kong garrison. Improvements include a slant/forward ejection system, a heavier barrel for improved accuracy and a more ergonomic safety selector switch.

For a while, from 1965 to 1988, the PLA did not have any military ranks (the early Soviet Army, the Albanian Army during the later Hoxha era, and the Khmer Rouge regime in Cambodia also did not have ranks, as a way to equalize the officers and the soldiers) and were forced to wear the iconic Mao Suit but with a red rectangle in their collars, specific to the PLA. This was done by Mao Zedong to take the PLA back to its guerrilla roots, and to curb what he saw as elitism in the armed forces. Thus the highest military commanders to ordinary soldiers didn't have ranks. This didn't go very well during the Sino-Vietnamese border war, where the PLA's chain of command was easily disrupted by their more hierarchical Vietnamese opponents. The military ranks were revived in 1988, and so the new PLA uniforms and badges of rank were first widely seen in Western media, most infamously in the Tiananmen Square protests.

The traditional PLA strategy in case of a major war was centered around the idea of "people's war"—a plan which called for luring the enemy deep, using guerrilla warfare to slow him down, and defeat him once he was overextended. After Mao's death; the need to prepare the armed forces to defend against a Soviet conventional attack; and the PLA's dismal performance in the Sino-Vietnamnese War, the 1980s PLA adopted the "people's war under modern conditions" strategy. This strategy consisted of a strong strategic defense phrase against a surprise attack, combined with guerrilla operations against mechanized forces' logistics lines; a strategic counterattack phase with armored forces against a stalled enemy; and finally a strategic offensive to push the enemy back to the international border.

PLA strategy after the 1991 Gulf War has moved away from these traditional concepts in favor of a modern doctrine suitable for fighting post-industrial wars.

Beginning at the turn of the century and continuing on into The New '10s, the Chinese military has been placing a lot

There is an extremely extensive and active subculture of Chinese netizens - the junmi - who obsessively document and follow the Chinese military - at least to the extent the CPC allows. The tendency towards nicknaming Chinese equipment (due to Article 432 of the Chinese Criminal Code punishing disclosure of military secrets) now extends to foreign equipment and armies too - the Yanks with Tanks are nicknamed the "World PD" or the "Global Liberation Army", whilst the ubiquitous F-16 Fighting Falcon is called the "Pomegranate Sister", which is a homonym with the Chinese word for "sixteen". The Chinese authorities have a strained relationship with them. On one hand the junmi tend towards extreme nationalism and statism, on the other their analysis of Chinese military photos is sometimes too good for PLA comfort - not to mention an occasional source of information for the many foreign intelligence agencies with their eyes fixed on China's rising military.