Spoiler Warning: this page contains unmarked spoilers for 428: Shibuya Scramble. You Have Been Warned! 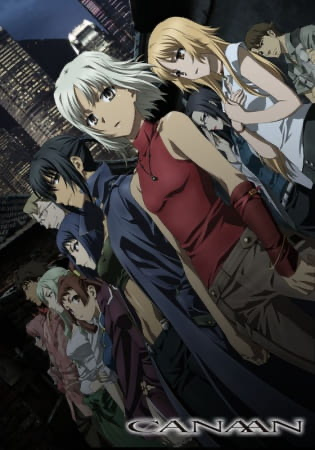 "Welcome to The Unholy Land! Colors have scent. Sounds possess images. In this future world, where biochemical weapons have changed the game, an unlucky few have their senses blended. They are gifted with abilities beyond what normal humans feel. They possess synesthesia. This makes them the perfect assassin. And a perfect target. Welcome to the new world. Welcome to the war."
Advertisement:

Canaan is an anime series based upon a scenario from the mystery Adventure Game/Visual Novel titled 428: Shibuya Scramble, which (the scenario, not the whole game) was created by Kinoko Nasu and Takashi Takeuchi of Type-Moon fame (at which point many tropers rush off to leech it from the Internet, no further questions asked). The game was obscure outside of Japan until its official localization was released in 2018 (till then, its notability in the West was basically being "that Visual Novel Famitsu gave a 40").

Neophyte professional photographer Maria Osawa travels from Japan to Shanghai to report on the annual festival, where she also hopes to meet Canaan, a mysterious Action Girl who saved her life a couple of years ago and has been fascinating her ever since. However, things get ugly when a Nebulous Evil Organization targets Maria. Known as the "Snakes", they are led by Canaan's arch rival Alphard and are somehow involved with the "Ua Virus"—the biological weapon that Maria was infected with during a Shibuya terrorist attack. Fortunately for Maria, Canaan shows up to save her again, much to her (and the fans') excitement.

The creation of the show has resulted in a franchise that includes manga and light novel adaptations.