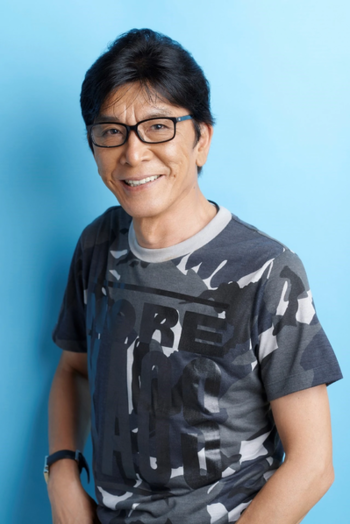 Releasing control art restrictions level 3. Level 2. Level 1. The Cromwell approval is now in effect. Hold release until target is silenced. Now... I WILL SHOW YOU HOW THE REAL JOJI NAKATA DOES BATTLE!
Advertisement:

The other (and newer) go-to guy for deep voiced villains. Joji Nakata (born April 22, 1954), often called George Nakata, is a man gifted with a deep, astringent voice, which lands him veteran roles. And, as we mentioned, villains. In fact, he has become so known for it that it is often easy to identify a person as evil just because Joji Nakata is voicing him. If he is playing heroes, you can be sure that the hero is either old, or at least an Anti-Hero. Either way, he also tends to hold mentor roles for other characters because his voice also lends itself well to exposition, explanations and Breaking Speeches.

He can also be compared to the likes of Norio Wakamoto in some circles, since the two of them are the biggest names in Japanese voice acting that have a notable forte for voicing villains. And starting with the aforementioned Hellsing, they've worked on number of roles together as well.

He's quite well-known to fans of the Super Sentai series, having voiced many major villains going from 1986's Choushinsei Flashman to the present day.

. Interestingly enough, he may reply some of the tweets in English as well.

This is a blasphemous description! This is madness!
Madness? THIS! IS! JOJI NAKATA! -Kick-