Anime / The Epic of Zektbach 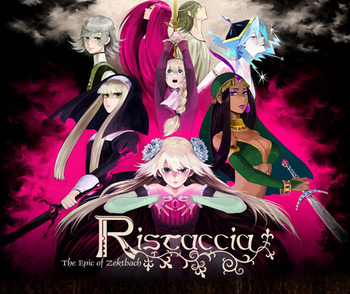 Top: Lien, L'erisia, Joah, ∑
Middle: Hannes, Nox, Shamshir
Bottom: Matin
If the thing called 'Word' is a kind of unlimited resource,then it is not only meaningless to choose words,but also impossible to create the epic poetry.
— ―Zektbach
Advertisement:

From Konami's BEMANI series, The Epic of Zektbach is a big story line set in the world of Aria Te'Laria where an object of power, namely Ristaccia, influences the world. There are eight Ristaccia pieces, collected by each eight races. The Ristaccia has given them conscience, emotions and knowledge. It has given them miracles, but soon it has also given them destruction as their thirst for knowledge overwhelmed them, starting the Ristaccia wars. After the wars, there are only two races left: The Humina and the Rufina. The Rufina, still curious of the power of the Ristaccia, made a memeplex of themselves by the name of ∑ then mysteriously disappeared from the world. The Huminas however are desperate for more power and miracles given by the Ristaccia, therefore forming the Holy Kingdom of Noigladdo. A person however rebelled against the rule, forming themselves a new country called the Azuelgatt.

The Epic of Zektbach follows the story of the characters Shamshir, Lien, ∑, Matin, Nox, Hannes, Gijiri and Malchut and how the power of Ristaccia influences them.

Originally, "Zektbach" is Tomosuke Funaki's pseudonym for producing fantasy-themed music mixed with electronica. Parts of the story are in music videos, character art, Drama CDs and a one-episode OVA.

The music videos in order of the story:

Tropes used in their works