Manga / The Legend of Koizumi 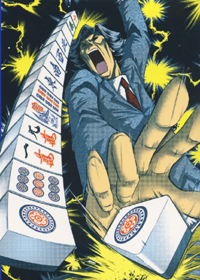 "That's right. Mahjong is man's attempt at recreating the Genesis."
— Pietro
"Ragnarok... The Mahjong of the Gods!"
— Koizumi
Advertisement:

The Legend Of Koizumi or Mudazumo Naki Kaikaku (Reform With No Wasted Draws), a manga by Hideki Oowada, is the story about how top country leaders battle it out with Mahjong to decide THE FATE OF ENTIRE NATIONS.

Got a three-episode OVA adaptation which premiered in February 2010.

Currently you can only find the series in English through a fan-translation currently translated through Chapter 100, approximately halfway through Volume 10. However, the series continues past this, with the Lion's Bloodline saga concluding in November 2015 with Volume 16. In August 2017 the series resumed with the Princess of Zipang saga. While the Princess of Zipang saw a renumbering of the volumes, the current number of volumes in the series is 20 as of the end of 2018.