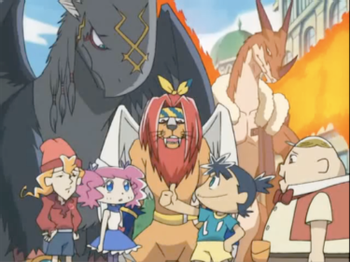 Legendz, a story about a boy and his dragon... or the other way around.

This was a fairly popular series in Japan even ranking up there with other Mons shows like Digimon or Pokémon at the height of its popularity. In fact, the character designs came from the same Bandai production team as Digimon. It came in two distinct (and oddly separate) series, the Manga and the Anime. However, only the Manga has hit US shores.

Tropes in the Legendz Anime