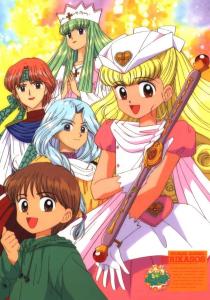 With courage to despise evil and a loving heart, I can save everyone!
Advertisement:

A fighting magical girl series that debuted in the height of the mid-Nineties Sailor Moon craze. Despite the young age (10-years-old) of the lead character, Ririka SOS courted the cross-demographic appeal of the genre through a down-to-earth atmosphere, a focus on drama, and a sense of dark-and-edginess that steadily built over its run. While great for audiences interested in a harder-hitting magical girl, it turned out to be not so great for the corporate sponsors or the show's longevity.

The story follows fourth-grader Ririka Moriya, whose life gets turned upside down when super-cool transfer student Nozomu Kanou (a.k.a. Kanou-senpai) gives her a birthday present out of the blue. The gift is a magical cap that allows Ririka to transform into the heavenly guardian, Nurse Angel. Ririka soon learns that Kanou is actually an alien whose home world, Queen Earth, has been overrun by the evil organization Dark Joker. With help from Kanou and her friend and neighbor Seiya Uzaki, she soon learns to fight as Nurse Angel to keep Earth from sharing Queen Earth's misfortune.

Nurse Angel Ririka started out as a manga series by Koi Ikeno and Yasushi Akimoto, published in Ribon from 1995-96; the 35-episode anime adaptation directed by Akitaro Daichi started airing about six months after the manga began and ran concurrently with it.