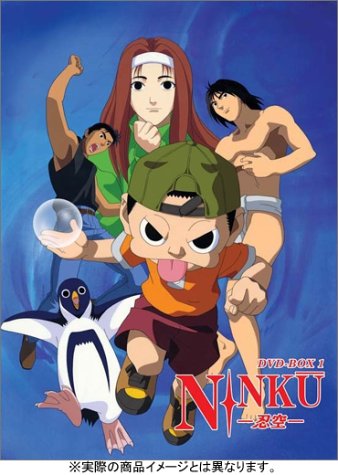 Ninku is a shonen manga series that ran in Weekly Shonen Jump from 1993 to 1995. It was also given an animated adaptation by Studio Pierrot and aired on Fuji TV in 1995-96.

The series follows the adventures of Fuusuke, Aicho and Toji, along with Toji's sister and a penguin. Long ago, a civil war erupted between the imperium and the ninku clan. The ninku were a fierce group of ninja with classical majic ninjutsu, divised into 12 ninku corps. All three of the guys were captains of their respective corps. Eventually the ninku were disbanded as the war went sour and now the remaining three are trying to find a way to defeat the imperium.

This series is notable for being the inspiration behind Naruto, although some would lean more towards plagiarism, seeing how similar the Rasengan and the Kuatsuken are. Masashi Kishimoto even initially drew Naruto in an outfit similar to Fuusuke.

Also has an ongoing sequel known as Ninku-second stage which started 2005.