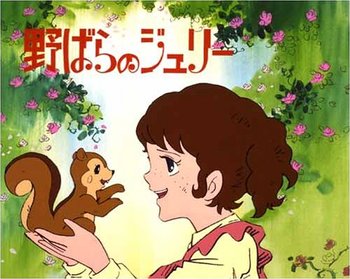 Our wild rose, Julie with her pet Pepe
Advertisement:

Nobara no Julie, or "Julie the Wild Rose" is a 13 episode anime created by Dax International in 1979, running between January 4th and March 29th of that year.

Julie Braun in the innocent protagonist, living in the Tyrolean countryside with her parents near the end of World War One. Unfortunately, while on a picnic with her family, they are killed when they're caught in an air raid, and Julie now must live in Vienna with her uncle's family, doing her best to fit in while keeping true to herself and traditions.