Manga / Not Your Idol 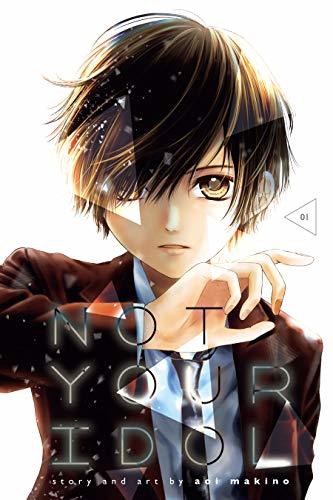 Pure Club, an idol girl group billed as "the last miniskirt idols on Earth, are on a tour to celebrate a million sales of their latest single. The girls have countless adoring fans, but none of them are as beloved as Karen Amamiya, the center of the group. At a handshake event, Karen's line of fans dwarfs the lines of the rest of her fellow members, and she greets each and every one of them with a warm smile.

Six months later, judo jock Hikaru accidentally bumps into Nina Kamiyama in the hallway. Nina has a bit of a reputation— besides her cold and aloof personality, she's the only girl at their school who wears slacks, leading her to often be mistaken for a boy. Nina receives judgement from both male and female classmates for her clothes and her attitude, and everyone typically leaves her alone— everyone but Hikaru, who seems to recognize her from somewhere.

Not Your Idol (Sayonara Miniskirt) is an ongoing Shojo manga by Aoi Makino. It started in 2018 and is running in Ribon magazine. Not Your Idol has been noted for its uncommonly realistic and somber depiction of serious subjects— a major part of the story involves an examination of the dark side of Japan's idol industry, and common themes include sexism, double-standards, assault, trauma, and victim-blaming. Two volumes are currently out, both of which have been localized by VIZ Media.

Not Your Idol contains examples of: