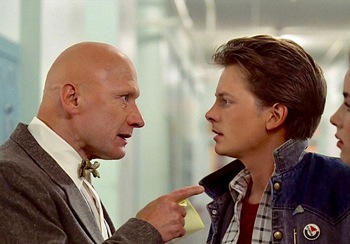 You got a real attitude problem. You're a troper! You remind me of your father when he went here. He was a troper, too!
"Marge, somebody's sucked all of the life out of these kids! And unless movies and TV have lied to me, it's a crusty, bitter old Dean!"
— Homer Simpson, The Simpsons, "Homer Goes to College"
Advertisement:

A Sadist Teacher in charge of an entire educational institution. This guy hates the protagonist and his friends — especially the High-School Hustler — with a passion. He has the entire institution with its long history and dignified reputation on his side. Its arbitrary and ancient rules exist chiefly for him to abuse in his vendetta.

Dean Bitterman is a pompous, self-absorbed and sour old killjoy who is opposed to the merest hint of fun. He believes that it cheapens the good name of the institution. However, don't expect this disdain to be evenly applied; he'll suck up shamelessly to wealthy parents. He favors the children of alumni and big donors. He has no problem with letting them get away with murder. He is quite blind to their obnoxiousness and malevolence — and the fact they are much worse than the heroes would ever be. In lay terms, Double Standard is on full display on his watch.

If you don't come from old money or have a trust fund, or even if you just happen to be in a fraternity or sorority that he disapproves of, then heaven help you.

If Dean Bitterman is temporarily taking the place of a more likable character, then he is starring in a Tyrant Takes the Helm story arc. The classic Dean Bitterman is found in colleges and universities. Sometimes he turns up in high schools, where he will be the principal of the school (or in some cases, the vice-principal acting as The Dragon to an ostensibly more pleasant principal, who may have selected him or her specifically to be their ax-man).

The Dean Bitterman is the ideological nemesis of the High-School Hustler, who may not make it a life mission to irritate the Dean and subvert his authority at every opportunity, but still does. Expect the Hustler and his friends to be expelled at some point, only to take their elaborate revenge in the climax.

In Real Life, while college faculty and rules on college campuses can obviously be biased, most deans and headmasters are far too busy and in charge of far too many students to have personal vendettas against a small set of them. Educational institutions typically have written rules and codes of conduct. Any dean that expels a student for reasons he created by fiat should expect several lawsuits. An increasing number of works have noted this - if only as lip-service - by putting Vice Principals and Deans in these roles, often with their ostensible bosses being either absent, swamped in paperwork, or senile (if friendly) old men barely aware they're even at a school.

Compare and contrast with Evil Principal, who is outright malevolent instead of just mean.

In terms of rank, the Authority Tropes arguably at the next step down are Badass Preacher, Corrupt Corporate Executive, Irish Priest, Preacher Man, Pedophile Priest, Schoolteachers, Sinister Minister, and The Vicar. For the next step up, see Majorly Awesome. Contrast Putting the "Pal" in Principal.