Film / Pump Up the Volume 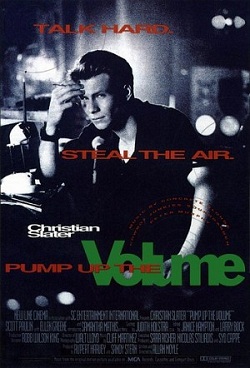 A 1990 movie written and directed by Allan Moyle and starring Christian Slater, Pump Up the Volume features the exploits of Mark Hunter, a recent transfer to Hubert Humphrey High in Arizona, where he spends his days as a moping teenager and spends his nights running a pirate radio station under the moniker Happy Harry Hard-on.

While entertaining the locals, his show becomes more political as he takes on the local school over injustices done toward the local student body. He goes from an underground favorite to a controversial figure overnight, however, when one of his call-in guests claims to be contemplating suicide... and then actually does it after hanging up on Harry.

The film underperformed at the box office, but has become a cult favorite since its release. In the long term, it's perhaps most notable for featuring the debut of Samantha Mathis and its soundtrack, as well as an early performance by Seth Green.