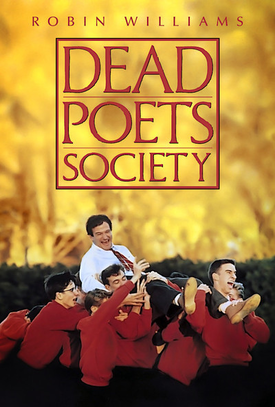 Dead Poets Society is a 1989 drama film directed by Peter Weir starring Robin Williams in one of his earlier "serious" roles.

It is 1959, and the prestigious, all-boys Welton Academy has just hired John Keating (Williams) as its new English teacher for the upcoming school year. A Blithe Spirit, Keating uses his classes to inspire his students to go against the flow and be themselves, somehow managing to make reading poetry seem like a cool, rebellious thing to do. A group of the boys, including Todd Anderson, Neil Perry, Charlie Dalton, Knox Overstreet, Richard Cameron, Steven Meeks and Gerard Pitts, form the Dead Poets Society, a group wherein they all sneak out at night to read poetry in a secluded cave. After witnessing many of Keating's unorthodox teaching methods and their effects on the students, Headmaster Nolan, the Dean Bitterman of Welton, tries to put a stop to this.

A novelization of the film was published shortly afterwards by N.H. Kleinbaum.

"Only in their dreams can men be truly free. 'Twas always thus, and always thus will be."