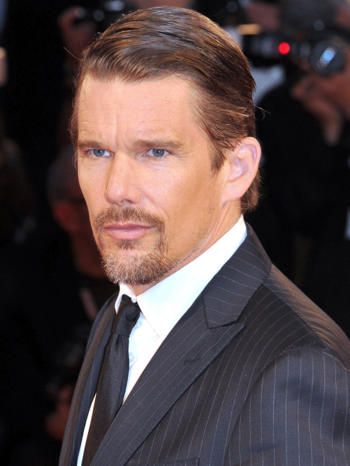 Ethan Green Hawke (born November 6, 1970 in Austin, Texas) is an American actor, writer and director. He has been nominated for the Academy Awards both as an actor and a writer. He also received a Tony Award nomination for his theater work.

Hawke made his film debut in 1985 with the science-fiction feature Explorers, before making a breakthrough appearance in the 1989 drama Dead Poets Society. He then appeared in such films as White Fang (1991), Mystery Date (1991), A Midnight Clear (1992), and Alive (1993) before taking a role in the 1994 Generation X drama Reality Bites, for which he received critical praise. In 1995 he starred in the romantic drama Before Sunrise, and later in its sequels Before Sunset (2004) and Before Midnight (2013).

In 2001, Hawke played a young police officer in Training Day, for which he received the Screen Actors Guild and Academy Award nominations in the Best Supporting Actor category. He also garnered two screenwriting Oscar nominations for co-writing the screenplays of Before Sunset and Before Midnight. Other films have included the science-fiction drama Gattaca (1997), the contemporary adaptation of Hamlet (2000), the action thriller Assault on Precinct 13 (2005), the crime drama Before the Devil Knows You're Dead (2007), and the horror film Sinister (2012).

Hawke has appeared in many theater productions including The Seagull, Henry IV, Hurlyburly, The Cherry Orchard, The Winter's Tale and The Coast of Utopia, for which he earned a Tony Award nomination for Best Featured Actor. Aside from acting, he has directed two feature films and three Off-Broadway plays. He also wrote the novels The Hottest State (1996) and Ash Wednesday (2002).

Between 1998 to 2005 Hawke was married to actress Uma Thurman, with whom he has two children — one of whom, Maya Hawke, has followed in her parents' footsteps and become an actress, and they have since played father-daughter John and Anne Brown in The Good Lord Bird. Since 2008 he has been married to Ryan Hawke (née Shawhughes), and they have two daughters. He is also a great-grandnephew of Tennessee Williams on his father's side.

Hawke is a huge fan of horror films and loves making them.