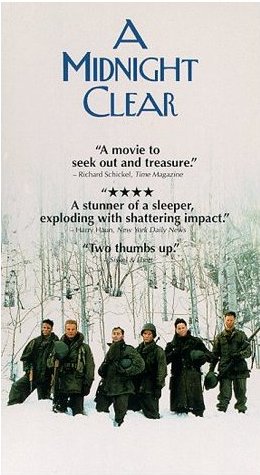 "Nobody in the army ever admits that someone on our side is killed. They're either lost, like Christopher Robin, hit, as in a batter hit by a pitched ball, or they get "it", like in hide and go seek. Or maybe they get it, as with an ambiguous joke."
— Will Knott
Advertisement:

A Midnight Clear is a 1992 World War II film directed by Keith Gordon and starring Ethan Hawke and Gary Sinise, amongst others. Gordon adapted the story from the eponymous 1982 novel by William Wharton.

During the Battle of the Bulge in December 1944, a US Army Intelligence squad commanded by Will Knott (Hawke) is sent on a reconnaissance patrol in the Ardennes. After occupying an abandoned chateau, they encounter a German platoon recently returned from the fighting in Russia, who have no wish to die in the upcoming offensive. After some bonding over Christmas, the Americans hatch up a scheme to take the Germans prisoner, in the meantime acquiring a medal for one of the soldiers, Vance "Mother Wilkins" (Sinise), who is suffering from a breakdown; they hope the medal will get him a safe job away from the lines.

The film has a recognizable cast with a heavy dash of Retroactive Recognition. Although it has was released to critical acclaim and eventually carved a niche for itself as a Cult Classic amongst war movie fans, it suffered from being released between the fad of anti-Vietnam War movies and the surge of World War II movies.