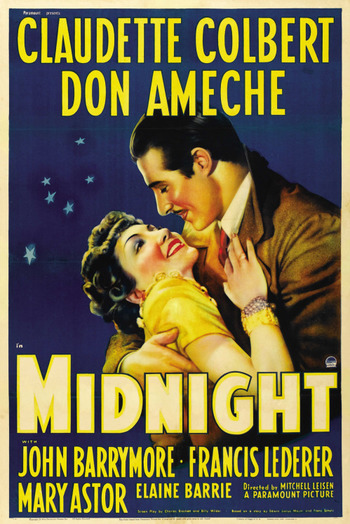 "Every Cinderella has her midnight."
Advertisement:

Midnight (1939) is a Screwball Comedy following the adventures of Eve Peabody (Claudette Colbert), an American showgirl penniless in Paris. It’s like the story of Cinderella, except a modern take with a wisecracking, gold digging girl who is more interesting than poor old Cinders.

The film begins with Eve meeting cab driver Tibor Cznery (Don Ameche); they both feel a spark, but Eve runs away, afraid of what this connection might bring. She sneaks herself into high society by way of a fancy musical soiree, meeting Georges Flammarion (John Barrymore) who easily spots her as an imposter. This gives him the opportunity to use Eve for a silly plot: get rid of Jacques Picot (Frances Lederer), the man his wife, Helene (Mary Astor), is falling in love with. Acting like a wonderful fairy godmother, he gives Eve lavish amenities and money as long as she does her job. Meanwhile, Tibor is searching all of Paris for his potential girlfriend, using all the cab drivers in Paris as lookouts.

Midnight boasts a screenplay by the writing team of Billy Wilder and Charles Brackett, and was directed by Mitchell Leisen.

In 2013, this film was chosen for preservation in the National Film Registry.