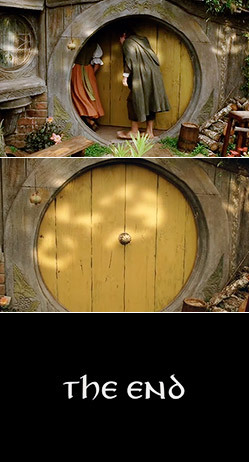 Sometimes at the end of a show, right before the Fade to Black, there will be a shot of a door closing, covering the characters from the audience's view. The type of door may vary, it could be anything from a typical front door on a house to the sliding doors of an elevator or the grand gates of some lavish estate.

Why the door is being shown this way at all will also vary.

These are a few examples, but it is by no means limited to them.

May overlap with any of various types of Discretion Shots. Opposite and possible Book End to the Open-Door Opening. A type of Hat-and-Coat Shot. Compare and contrast with Off-into-the-Distance Ending, Ending by Ascending.