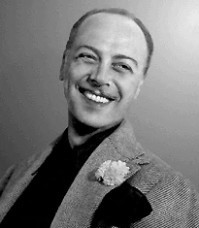 James Mitchell Leisen (October 6, 1898 – October 28, 1972) was an American art director, costume designer, and film director during The Silent Age of Hollywood and The Golden Age of Hollywood. Largely overshadowed by the talents of other directors or writers, he, nevertheless, was a popular director and has been rediscovered throughout the years.

Leisen began his Hollywood career as a costume designer for Cecil B. DeMille in a Gloria Swanson vehicle, Male and Female. He continued to work in subsequent silent films: Forbidden Fruit, Rosita (Ernst Lubitsch’s first American film with Mary Pickford), Robin Hood (the Douglas Fairbanks version), and The Thief of Bagdad.

Tired of costume design, Leisen went into art direction, working for DeMille once again. Moving to Paramount to become a director, he directed many films during The '30s, varying from musical/thrillers (Murder at the Vanities) to screwball comedies (Hands Across the Table/Easy Living/Midnight) to dramas (Death Takes a Holiday/Swing High, Swing Low). Even as a director, he continued to design haute couture, interior decorating for luxury homes, and set designs for the famous Hollywood nightclub, The Coconut Grove.

He famously changed the scripts of Billy Wilder and Preston Sturges—usually in favour of an actor's opinion—infuriating the writers in the process. He, therefore, was the catalyst for these scriptwriters to director their own material.

His peak came during The '40s, and he continued to work, with diminishing results, throughout The '50s. TV was another avenue he went to, directing The Twilight Zone (1959), Shirley Temple’s Storybook, and Wagon Train.

Retiring because of heart issues, he died at the age of 74, largely forgotten and ignored; however, his work has shown an enduring quality.