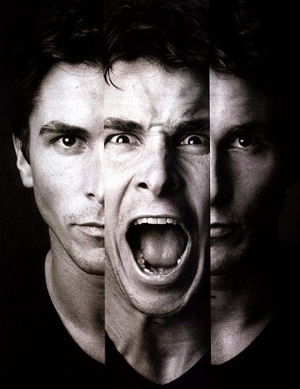 Robert: Take it from me: A very good sign that you're crazy is an inability to ask the question, "Am I crazy?"
Catherine: Even if the answer is "yes"?
Robert: Crazy people don't ask, you see?
— Proof
Advertisement:

Some people laugh as a sign of mental instability. Others speak in a Creepy Monotone or openly show signs of being violent.

Then there's the character who's revealed to be insane and shows almost no signs of being crazy until that point... at least not publicly.

A character that feigns sanity quite simply is the kind of person that can maintain their façade in most social situations but is completely insane on the inside. So naturally when the audience figures this out it can sometimes be a major Plot Twist. Other times the character's craziness could be apparent to the audience from the start, and not the other characters. Either way beware of spoilers.

, which describes how people that aren't stable can blend in with society.

Yandere and Cute and Psycho are Sub Tropes, when people may act perfectly normal until that certain trigger is pressed, then they quickly turn into murderous psychopaths. Taking off the mask can be seen as a Villainous Breakdown.