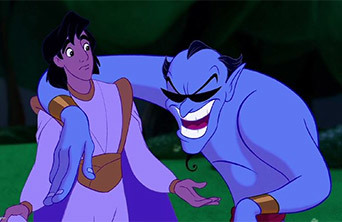 "Heeeeeere's... Genie!"
"Are you a genie who does references only my parents get?"
— Billy, The Grim Adventures of Billy & Mandy
Advertisement:

Often, you'll want to get some Parental Bonus or cool and hip comedy into your work to broaden your appeal to the Periphery Demographic.

One common method of doing this in Science Fiction and fantasy is by having a non-human character or a magical creature of some sort appear to be in tune with the cultural Zeitgeist of the time period when the work was made, but not the one the work is actually set in, adding an extra touch of spice to the Anachronism Stew. Thus, space aliens will watch Casablanca, gremlins will cosplay as Rambo, and, yes, the Genie will impersonate Jack Nicholson. Logically, there does come a moment when you must ask, "This alien/gremlin/genie can do all of these insane things, but they can't violate causality?"

This can be justified in various ways. Perhaps the character is a time traveler, or spent a great deal of time on Earth at one point, or has intercepted Earth's TV and radio transmissions and fallen in love with them.

Though this particular gag did not originate in The '90s, it became very popular for a long time following the smashing success of Disney's Aladdin.

A bit of trivia: This trope was almost called "The Genie Knows John Wayne". In the original script, Genie was supposed to do a John Wayne impression (note the line about being a "straight shooter"). But Robin Williams did a better Jack Nicholson impression.*  Oddly enough, Williams explained his process to create that impression in one special as "you take John Wayne and tighten up his ass."

Very much comes under the Rule of Funny and Willing Suspension of Disbelief.

Compare to the Fish out of Temporal Water, who may make constant pop cultural references as a way to remind himself of home, even if none of his new friends understand them.