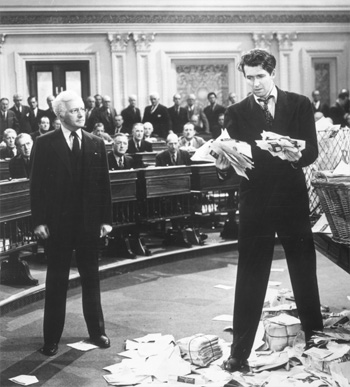 When someone asks you to write a letter to your Senator, do it. It works. They get really agitated.
"Liberty's too precious a thing to be buried in books, Miss Saunders. Men should hold it up in front of them every single day of their lives and say, 'I'm free to think and to speak. My ancestors couldn't, I can, and my children will.'"
— Jefferson Smith, doing Eagleland proud
Advertisement:

A film from 1939, directed by Frank Capra, with an All-Star Cast that included James Stewart, Jean Arthur, Claude Rains, Edward Arnold, and Thomas Mitchell. One of Capra's greatest works, and maybe the best movie Stewart ever made.

A senator dies in the middle of his term, and the state Governor (Guy Kibbee) has to pick a replacement. The crooked political machine controlled by Jim Taylor (Arnold) has a candidate in mind, but this man is already known to take positions unpopular with the populace of that state. The reformers in the state are agitating for a radical to get the seat, but the crooked political machine won't stand for that.

The Governor decides to Take a Third Option: He picks someone who is highly idealistic but inexperienced in politics, whom he thinks the political machine can keep under control. This person, this new senator, is Mr. Jefferson Smith, leader of the Boy Rangers.

Mr. Smith gets to meet his idol, the other senator for his state, Senator Joseph Paine. Sen. Paine did great things for the state many years ago and he was a personal friend of Smith's father. He's controlled by the machine now, unfortunately, but Mr. Smith isn't really aware of the machine yet.

Once in Washington, he also meets his chief of staff/secretary—the very beautiful, intelligent Saunders. She does have a heart of gold, but she's an utter cynic.

Now, there is one problem the state machine has with Mr. Jefferson Smith. Mr. Smith has one issue he supports—building/improving a Boy Ranger camp by a major river in the state. But one of the main goals of this machine is to dam the river (to produce profit for the machine boss, who owns some of the land), which would wipe out many of the natural attractions Mr. Smith hopes to preserve. So, the senior senator and his secretary have to prevent Mr. Smith from voting against the dam, decoying him away from a session where a crucial preliminary vote on the issue is held by sending him on a date with the senior senator's daughter.

However, despite the best efforts of Taylor and Paine, Smith finds out about the dam. Taylor and Paine try to buy Smith off, but not only does he refuse a payoff, he vows to expose their crooked deal. Backed into a corner, the Taylor machine turns on Smith—with a vengeance.

James Stewart was already a man on the rise in Hollywood after his turn in the previous year's You Can't Take It with You, but this movie made him one of the leading stars of his day.

Fun fact: Jean Arthur had an imbalanced profile. She believed that she was much prettier from her left side than her right, and a lot of Hollywood people agreed. Watch her scenes in this movie and note how she's almost always shot from the left.