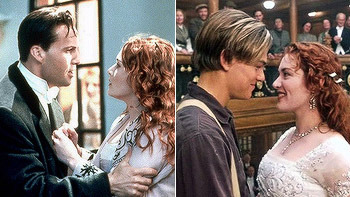 "One of them is dark and poor
One fair with lots of money
I don't know which one to choose
The flower or the honey"
— Celtic Woman, "At the Ceili"
Advertisement:

One of the most common complications in the classic Love Triangle scenario. Two men are vying for a woman's affection. Who's the right one? It's hard to tell, but there's a good chance that one of them is considerably wealthier than the other, and he can provide security, glamour and the good life, while the other (who has a good chance of being an impoverished artist) can give none of the same. What are you gonna do?

Most of the time, it's going to be "go with the poor one," and the story will carry an Aesop that true love is worth more than material wealth. This makes sense if the rich one is a total bore or outright jackass, or the woman is just not in love with him as she is with the broke one. When done poorly, the rich one often ends up as the Designated Villain. This trope overlaps considerably with Wrong Guy First and Disposable Fiancé, but keep in mind that the rich suitor is not necessarily wrong, first or particularly disposable.

This trope is most often "two men and one woman" because of a sense that woman needs someone to 'provide for her'. This sort of logic ties into Unable to Support a Wife and generates part of this trope's conflict.

If the suitors are also a Betty and Veronica pair, the dynamic will typically be either "poor but nice suitor vs. rich but haughty suitor" or "poor but exciting suitor vs. rich but boring suitor", being obviously slanted toward the poor suitor in both cases. In fact, having the rich suitor win or even be a decent, likeable person is a rare variation of this trope (and Not a Subversion). Perhaps the trope name should have been "Poor Suitor Wins" instead? The odd exception can happen though, with the rich suitor being a nice, decent person and the poor suitor being a male Gold Digger.

Compare Gold Digger, Meal Ticket, and Uptown Girl. It can involve Compete for the Maiden's Hand.