Western Animation / Moomins on the Riviera 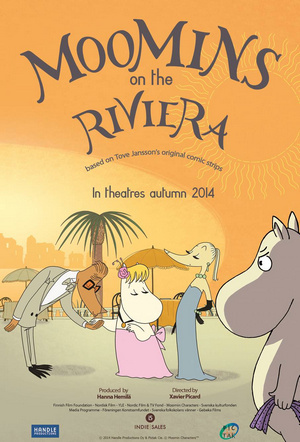 Moomins on the Riviera is a 2014 Finnish-French animated family film based on the Moomin comic strips by Tove Jansson. The film is a co-production of Finnish Handle Productions and French Pictak Cie.

The film is based on the Tove Jansson's original comic strip, Moomin on the Riviera and it is the first animated feature to be based on the Moomin comic strips rather than the books. In the film, the Moomins, along with Snorkmaiden and Little My, sail for the French Riviera, where their unity is threatened. Snorkmaiden is dazzled by the attentions of the playboy Clark Tresco and Moominpappa befriends an aristocrat Marquis Mongaga, while Moomin and Moominmamma decide to move to the beach in order to escape all the glamorous extravagance.

Riviera was released theatrically in Finland in October 2014 to celebrate the 100th anniversary of Tove Jansson's birth.

Moomins on the Riviera provides examples of the following tropes: