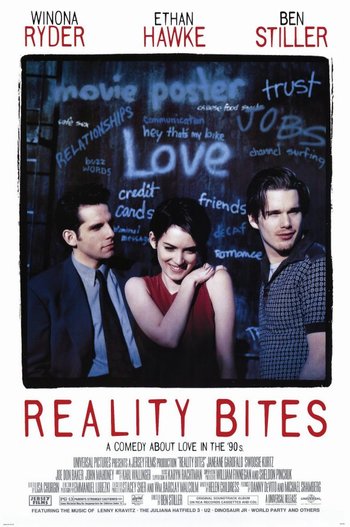 Reality Bites is a 1994 romantic dramedy/Coming of Age film directed by Ben Stiller, about four disaffected twentysomething friends from Houston trying to assess the direction of their aimless lives. It's widely remembered for capturing the zeitgeist (for better or worse) of 1990s Gen-Xers.

Winona Ryder stars as Lelaina, a recent college graduate with big dreams of becoming a successful videographer. She shares an apartment with Troy (Ethan Hawke), a Grunge-rocking slacker, Vickie (Janeane Garofalo), a promiscuous Gap-managing snarker, and Sammy (Steve Zahn), a guy struggling with coming out to his parents, who are facing similar uncertain crossroads in their lives. Lelaina meets and dates Michael (Stiller), a yuppie who works for an MTV-like television station.

According to the screenwriter, the film's title is supposed to be a play on the term "sound bites," meaning "bites of reality" and not "reality sucks," as it is commonly interpreted.